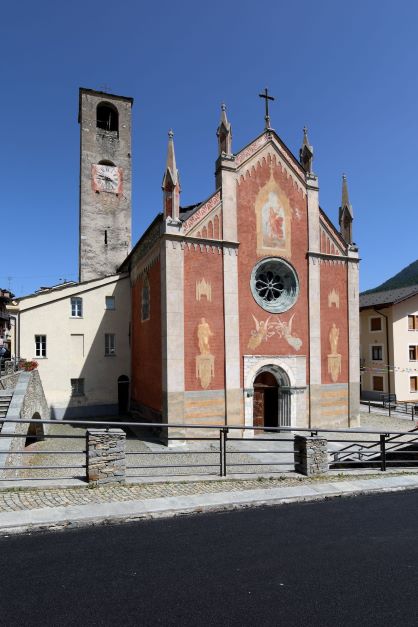 Parish Church of Saints Peter and Paul of Sampeyre

The building was constructed on a Romanesque-Gothic plan.  It was already in existence at the end of the 14th century and then modified in the mid-15th century.

The rose window on the façade, the portal sculpted in green stone with floral and anthropomorphic motifs and the capitals supporting the wooden beams all belong to this period.  The interior has a single nave.  The decoration on the ceiling is in neo-Gothic style and the side chapels are dated the 19th century.

Valuable frescoes remain in the blind arches on the left where the Biazaci brothers of Busca painted the stories of the life of Jesus between 1470 and 1480.  The baptismal font in white marble sculpted by the Sabreri brothers of Pagliero in Maira Valley is dated 1482.